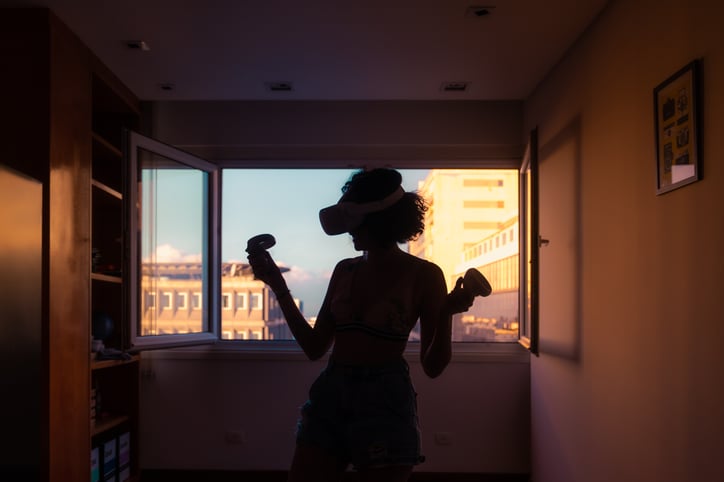 Virtual real estate, once the realm of science fiction, has taken over the real estate market in recent years. It's one of a handful of fantastic developments in real estate technology that have swept the industry. Let's look at five of the best VR headsets for touring your new property from the comfort of, well, anywhere you like.

The user gets a first-person view of their surroundings. This is important to virtual real estate because it allows you to feel like you're really there. Any room or passage or wall or fixture is presented as if it's right in front of you, and you can navigate around it the way you would, in person.

For real estate, this is done in one of two ways. Either the property is rendered in simple 3D, with flat elements to show size and depth, or an "image" of the room will be taken with a panoramic camera. This second option allows for more realistic depictions of the room, but less maneuverability around the 3D space.

Whichever option you use, you'll need a VR headset. We've found some of the best headsets for real estate out there.

No list of VR headsets, for any purpose, would be complete without mention of the Oculus Rift.

A more established model, this headset uses high-end equipment, two screens, and an avalanche of sensors to create a polished VR experience.

In the VR real estate industry, more is always better. Oculus creates a full range of motion by offering six degrees of movement, and a pair of hand controllers to help you interact with environments.

Estate agents have seen huge upticks in sales thanks to this tech in recent years. While it does require a more powerful computer to run, the upside is in creating a unique tour experience for each user. Virtual real estate looks great, and buyers get a real "feel" for the place, long before they ever set foot in it.

This next entry might be considered a bit of a cheat, as it started as a co-development between Oculus and Samsung.

That said, the Samsung Gear VR headset has come into its own since its initial development, and nobody makes the association with Oculus, anymore.

A lot of it has to do with their different approaches. While the Oculus prioritizes high-end tech with a huge number of sensors, the Gear VR cuts through that to provide a low-cost option.

Taking an opposite approach to VR, Samsung's headset uses one screen instead of two and provides none of the peripheral components. Furthermore, the screen is actually a clipped-in Samsung phone, with the image split into two. This makes it cost-effective and very versatile.

Not a traditional VR headset, this is actually an augmented reality piece of tech, that incorporates VR elements.

The HoloLens uses clear lenses and imaging technology to overlay virtual images on top of real-world environments. These are commonly known as holograms, and they appear as real objects, in the room.

It's this approach that makes the HoloLens invaluable for planning out the layout of a room. In real estate, this kind of opportunity is hard to pass up. Developers use holographic imaging to show future fixtures, after remodeling, and space for items and furniture.

In a pinch, these can also be used to take buyers on tours through large, unoccupied spaces, while they're overseas or away from the property.

Taking our list back to the more cost-effective options for virtual real estate tours, we have the Google Cardboard headset.

And, when we talk about budget-friendly VR headsets, there is no model out there kinder to your wallet than the Google Cardboard.

This is a foldable headset, made from a corrugated cardboard sheet. The company mails buyers a single, precut sheet of card for as little as $15. They fold the board into the shape of a headset, securing it with built-in tags.

The headset has a holster for a smartphone which, similar to the Gear, is used to display two images, one for each eye. Using something like Google's Daydream View app, it's possible to create a virtual tour of the property while keeping costs down.

Our final choice brings us neatly back to the more expensive side of the VR headset spectrum.

Sometimes it's worth investing in premium equipment, and a decent headset can go a long way towards selling property as high-end.

The HTC Vive offers premium picture quality and responsive movement, but it's its peripherals that make it truly special. Using a set of sensitive IR sensors placed around your physical room, the Vive integrates your movement into the virtual space in real time.

As potential buyers take tours around their new home or office, they'll be treated to a walk-around that's almost as good as the real thing. Though it admittedly requires a high-end computer to run, this is an ideal device for creating any VR experience.

In the last three years, VR technology has made an impressive reentry into the world of gaming, entertainment, and real estate.

With so many fantastic headsets to choose from, covering such a broad range of prices and features, there is something out there for everybody.

Whether you're looking into design work, building permits or safety engineering standard, we've got what you need to get the job done. Get in touch with us today, and let's discuss your next big project!